Why Use a Wok With a Round Bottom?

by R7eagle | Last Updated:  May 7, 2021
WokOwner is owned and operated by WokOwner.com. WokOwner is a participant in the Amazon Services LLC Associates Program, an affiliate advertising program designed to provide a means for sites to earn advertising fees by advertising and linking to Amazon.com. WokOwner also participates in affiliate programs with Avantlink, Impact, CJ, ShareASale, and other sites. WokOwner is compensated for referring traffic and business to these companies.

I thought I knew everything about woks, after all, I have been using flat-bottomed woks for years. Then I discovered the round-bottomed wok!

Here are some interesting facts about round-bottomed woks:

In the table below are some of my highest recommended round-bottomed woks. I suggest you go to Amazon and read the reviews on those that you would be interested in. In that way, you will be most informed as to the wok that would most likely fit your needs.

Stir-Frying is Easier in a Round-Bottomed Wok

The heat distribution in a round-bottomed wok is more linear than a flat-bottomed wok. This direct heating from the very bottom of the wok to the top edge makes it much easier to toss and stir fry your ingredients.

Round-Bottomed Woks Do Not Warp

The heat is evenly distributed up the sides of the wok in a linear fashion. Flat-bottomed woks, on the other hand, can have hot spots at the bottom of the wok because of the flat shape, which makes them susceptible to warping in high heat conditions.

The bottom line is that the shape of utensils should not be the deciding factor in your wok purchase. It is better to shape the utensils to the wok rather than the wok to the utensils.

Below are some of the woks spatulas that I can recommend. I have used them all.

Out of all the wok spatulas above, I really like the teak wood spatula shown below. The angle of the end of the spatula fits perfectly against the side of the wok. In addition, I can scrape the food from the sides and bottom of the wok without scratching the patina off. 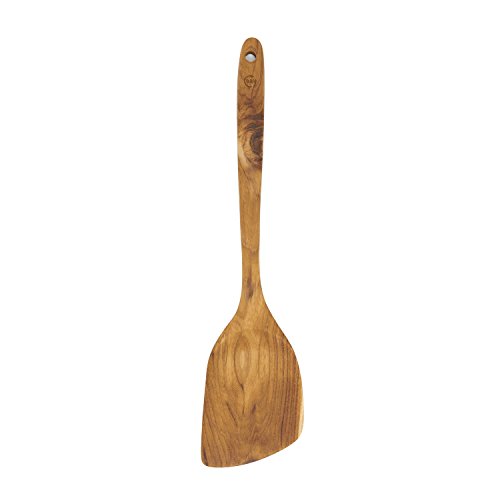 Woks have been used for over 3,000 years in China.  The first wok was a round-bottomed cooking vessel.  Most of the original woks were hand-hammered.

Today, wok use is most prevalent in South China, particularly Guangdong Province.  However, it is one of the most common cooking utensils in all of China and many parts of Asia, as well as becoming a favorite throughout the world.

Most commercial restaurants that use woks use round-bottomed woks. These restaurants usually have special stoves that generate a great deal of high heat. Carbon steel woks are the choice of professional chefs.

Woks are able to accommodate a wide range of different cooking techniques:  stir-frying, steaming, pan-frying, deep-frying, poaching, boiling, braising, searing, stewing, making soup, smoking, and roasting nuts. Spatulas or long-handled utensils (such as wok ladles) are used when cooking with woks. Since woks get very hot in the traditional method of cooking, the extended handles allow cooks to work with the food without getting burned.

If you are considering purchasing a hand-hammered wok, make sure that the rivets that attach the helper handle are riveted like the POW wok pictured below.

Round-bottomed Woks Have Many Advantages

Round-Bottomed Woks Have a Few Disadvantages

Here is a Flat-Bottomed Wok With an Inner Round Surface!!

Golly, you have hybrid cars, and now you have a hybrid wok! This wok is cast iron and is unusual because it has a flat, outer surface to contact the stove but a curved, inner surface. You have the best of both worlds! You can use this wok on a grill, gas stove, electric glass or porcelain stove, or an electric coiled stove.

Do not put cold water into the hot cookware.  Do not let it air dry before cleaning.

Do NOT buy a stainless steel wok. The food will always stick. For heaven’s sake, never buy an anodized aluminum wok either. EVERYTHING sticks to it, especially eggs, which are used in Chinese fried rice. This applies whether you purchase a flat-bottomed or a round-bottomed wok.

Do not buy woks that are pre-seasoned or non-stick unless it is made of cast iron. The non-stick surface can burn off with high heat over a length of time. This can be unhealthy and very costly. You do not want to buy a new wok every time the surface wears away or risk unhealthy cooking.

Here is another point I found during my research. Using either a flat-bottomed or round-bottomed wok on an electric range or stove does not get hot enough. Some people suggest that you would be better off using a carbon steel pan or skillet for stir-frying.

If you are serious about stir-frying with a round-bottomed wok, I recommend you investigate wok burners. Check Amazon for availability. These burners are made for woks, and they get very hot! To the right is the Eastman Outdoors 90411 Portable Kahuna Burner with XL Pot and Wok Brackets with Adjustable and Removable Legs.

This burner will generate more than enough heat for your round-bottomed wok. It is excellent for picnics or large gatherings. It is not intended for indoor use.

Some say that you can use a wok ring with your wok. The problem with a wok ring is that it keeps the wok away from the heat source. If you are trying to get the heat on the wok as high as possible, then the wok ring will be working against you. Wok rings work best when used with a gas stove.

Here is the trade-off. One hand the wok if you use a wok ring it will be further from the source of the heat and it will take a little longer to heat the wok. On the other hand, the wok will be more stable on your stove.

I would prefer that the wok be more stable on my stove from a safety standpoint, so my vote is “use a wok ring”.

Stay Away From Teflon or Chemically Coated Woks

With Teflon-coated woks, the coating can come off with high heat and the fumes are very toxic – taboo for Asian cooking! Just stay away, far away, from anything with Teflon.

A lot of manufacturers have avoided Teflon coating their woks but are using other forms of coatings, and only time will tell if these will become toxic. Just stay away from anything that is not carbon steel or cast iron, and you should be ok.