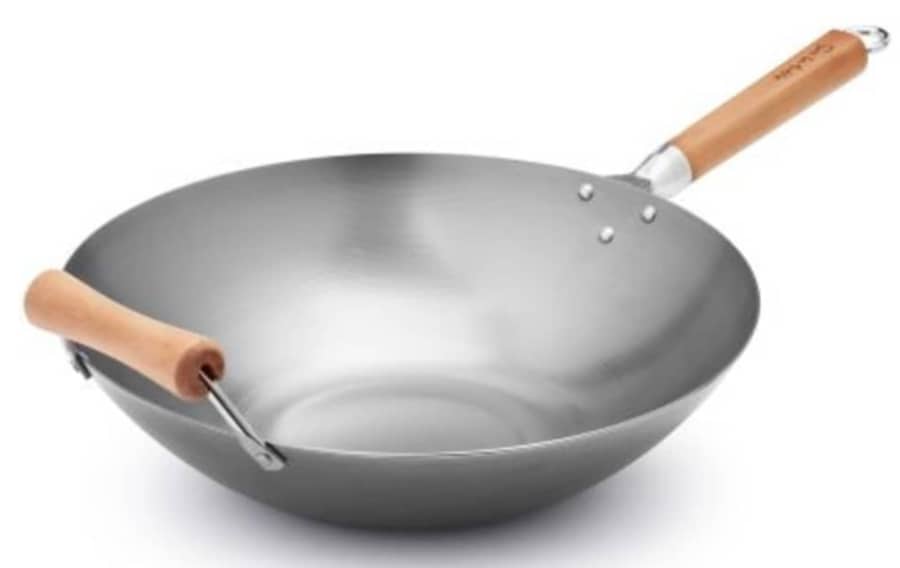 Here is what I learned:

If you plan on using your wok on a flat surface, like an electric glass, porcelain, or induction cooking surface, it would be best to use a flat-bottomed wok. The flat portion of the wok should make full contact with the cooking surface. A round-bottomed wok will only make one small connection with the stovetop.  This will not be enough to use your wok effectively, because it will never get hot enough.

Things to Consider When Selecting a Flat-Bottomed Wok:

The Size of the Wok Depends on…

The standard size that most people use is 14 inches in diameter.

If you only have a small burner under your wok, you do not want a wok with a large, flat bottom. Usually, it is desirable to have the flat surface of the wok be slightly smaller or the same size as the burner beneath it.  This will allow for more evenly distributed heat.

Helper handles are not a critical factor in determining your wok purchase. However, they are a handy addition to any wok. One large handle is standard, but the extra, smaller handle is very beneficial.

If you have limited space to store your wok, as I have, then you might consider the smaller, metal helper handles. They take up less space than wooden ones. On the other hand, wooden handles don’t get as hot as the metal ones, and you usually do not have to use oven mitts to manipulate your wok. If you can get bamboo handles instead of wood, they are even better, because they do not get as warm as the wooden ones.

A flat-bottomed wok will work on most cooking surfaces. They can work well on induction stoves, electric glass stoves, gas stoves, rocket stoves, and even outdoor grills. Flat-bottomed woks don’t wobble around like round-bottomed woks.

Woks may be constructed of stainless steel, cast iron or carbon steel, and they may or may not have a non-stick coating.

Stainless steel woks have a sticking problem, and they are costly. Coated or non-stick woks have the potential to add toxins to your food, and the non-stick surface doesn’t last very long.

In my experience, carbon steel or cast iron woks are the best ones to use. They both hold the heat well, and both can be non-stick, depending on how well you season them.

If you are considering a flat-bottomed cast-iron wok, I recommend the pre-seasoned cast-iron wok by Lodge. These woks are very heavy. The weight is about 11.6 pounds. They work well on all kinds of cooking surfaces, such as gas stoves, electric coil stoves, porcelain or electric glass-topped stoves, etc. These woks hold their heat well and are reasonably priced. These cast iron woks have a flat bottom that contacts the cooking surface, but the inside of the wok is round. This inside round portion of the wok is excellent for stir-frying. Check the availability at Amazon.

The only drawbacks to these cast-iron woks are:

Carbon steel woks, on the other hand, do not break if you drop them, and they are not as heavy. Carbon steel cookware is not as brittle, because it only contains about 1-2% carbon.  Cast iron has a higher ratio of carbon to iron.

Most woks sold in western countries have flat bottoms—this makes them cook differently than round-bottomed woks. Flat-bottomed woks are more similar to a deep frying pan, because of the shape of the wok bottom. Flat- bottomed woks work with all types of stoves because the bottom is able to make contact with the stoves’ heating elements or flames.

The flat-bottomed wok does not get as hot as the round-bottomed wok, because of the shape. This could affect your stir-frying capabilities. If the food at the bottom of your flat-bottomed wok is allowed to sit for any length of time without high heat and constant stirring, the food could be stewed instead of being stir-fried.

I like the carbon steel Helen Chen flat-bottomed wok above because it has two wooden assist handles and a smaller flat bottom. Check it out at Amazon.

The carbon steel in most of the flat-bottomed woks is stamped and not hand-hammered.

I say most because there are a few hand-hammered flat-bottomed woks, as shown in the picture below that are available from Amazon. Notice how large the flat portion of the wok is. What I do not like about this wok is the size of the flat bottom. 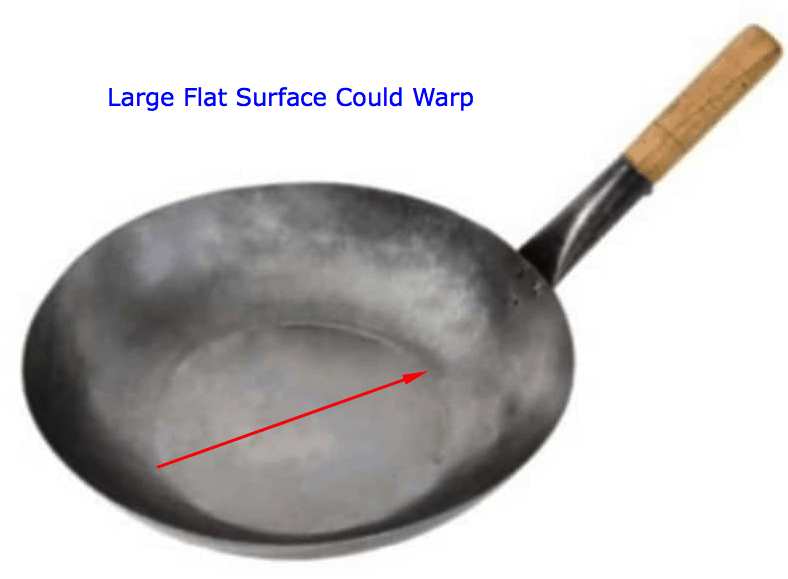 There is a high probability that the flat portion of this pan will warp when applying high heat. Once the bottom distorts, it will not lay flat on your stovetop.  You will get uneven cooking, and it will most likely wobble.

This would not be my first choice in flat-bottomed, hand-hammered woks. If you like this particular wok, make sure you bring up your heat slowly to prevent warping.  However, please realize that it might still warp, depending on how thick the metal is. The thicker the wok metal, the less likely it will warp. I understand, from my research, that this wok has a wall thickness of only 1.6mm, which is pretty thin for a carbon steel wok.

The only thing I like about this wok is that it has a wooden handle that can be removed during the seasoning process. Other than that, I cannot recommend this wok as being the best selection for your cooking needs.

I highly recommend a wok such as the Helen Chen flat-bottomed wok. Check out the availability at Amazon.

Why Use a Round-Bottomed Wok? Round-bottomed woks are the traditional woks and are best used with wok burners.

What Kind of Wok is Best For an Electric Stove? Flat-bottomed woks are best used on gas stoves, induction stoves, and electric stoves.

link to How to Clean a Cast Iron Wok

A wok is the most versatile cooking utensil in a kitchen. Considering that cast-iron tends to be a kitchen-favorite when it comes to material, it only makes sense that a cast iron wok becomes the...

Continue Reading
link to What is a Wok Used For?

Besides stir-frying, you will find your wok perfect for deep frying, stewing, steaming, braising, or even for the perfect bowl of popcorn! Yum...

Welcome to My Site